Well done to all our award winners from our Presentation Night over the weekend and to all who came along to celebrate a fantastic season 2020/21 and present our awards for both this and last season.

Thanks to the Diamond Valley Trophy Centre for doing an outstanding job with all our trophies. Thanks also to the Rosanna Golf Club for one again hosting.

Steve Villani with 508 runs meant the first time two players scored more than 500 runs in A Grade in the same season.

Chris Salm with 40 Wickets was the 11th time a player has reached the 40 mark in A Grade.

Dempsey took out his 2nd bowling average, following his 4th XI in average in the 15/16 season

Scott Gibbs became the highest aggregate of runs scored (616) in a C Grade season, passing Leigh Bowmans total of 577 in the 03/04 season. Taking out his 5th Batting and 6th Bowling awards. Was also the 3rd time Gibbo has won the double in the same season.

Well done to Bang on his 2nd Batting Average in a row, taking out the G2 Batting Award last season and also to Luke Jurkovic for his 1st club bowling average.

MMS wins his 1st club batting average, MMS now also holds the two highest aggregate runs scored in a season for the club with 751 Runs backing up his 951 Runs from the previous season. Well done to Matt Newell for his 3rd 5th XI Bowling Average in a row.

The last 17 batting averages in the 5ths have been won by 17 different players.

Well done to both Sams for their first club average awards! Our first Average winners in our 7ths since the 2009/10 season. 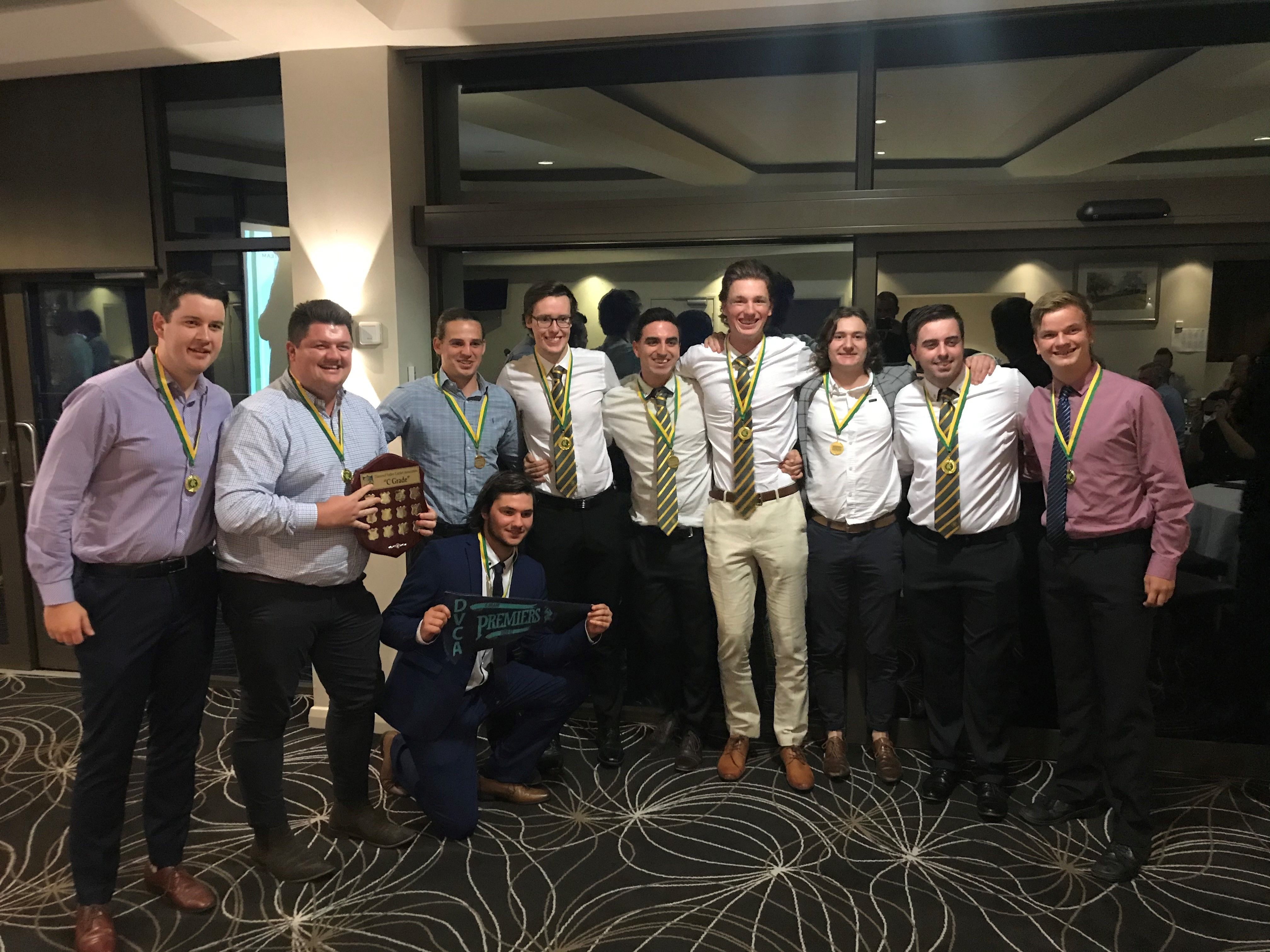 Well done to Scott Gibbs who won his 7th Presidents Trophy (Next best is Dennis Maley and Kevin Lee with 3), which is awarded based on points for runs, wickets and fielding. Gibbo (175 Points) finished the season with 616 Runs, 23 Wickets, 5 Catches and 1 Run Out, beating out Chris Salm and Nathan Chrimes for the award.

Team of the Year

Well done to the 13 players who have made the team of the year, congratulations to Scott Gibbs with his 1st selection as captain and Steve Villani with his 2nd year in a row as vice-captain

Congratulations to Kym Ellks, who took out the award for the 2nd time. Joining Steve Bowler, Tim Money, Shane Doyle and Brett Money to win the award multiple times. Kym was acknowledged for her incredible amount of work on the committee, which included running the canteen most weeks, helping out at functions and willingness to assist where possible.

Congratulations to Kym Ellks as the inaugural winner of the Paula Money, commissioned in honour of the loss of not only one our life members, but an incredible Wife, Mother, Aunty and friend to many at Riverside. Our winner recognises some of the outstanding attributes and acts that best represented Paula: Care for the club, selflessness, going above and beyond for others and kindness. Kym was a deserving winner for all these attributes she demonstrated and more. It was tremendous that Phillip, Josh and Ben were able to present the award to Kym. Well done Kymmy!

Congratulations to Ben and Josh Money who became the 2nd set of brothers to win the coaches award (Dylan & Lachlan Potter 2012/13). Coach Luke Rosbrook acknowledged their ability to stand up in the face of adversity, continuing to turn up week in and week out with a positive attitude to every aspect of their cricket and strive for improvement every time they did. Their resilience, persistence and general presence making the club a better place.

Congratulations to Tom Hewett for taking out our Best Under 18 player for this season. Tom played every game in B Grade this season as wicketkeeper, showing great improvement in his keeping and batting skills as the season progressed. Tom finished the season 118 Runs Batting at Number 7, with a top score in the Grand Final of 18, and with 20 catches, 6 run outs and 4 stumpings showing his polish with the gloves.

Congratulations to first year player Tane Cotter for taking out the Best Under 21 player this season. Tane became the 253rd player to represent the club in the First XI, playing every game this season in A Grade. Tane showed his all-round skills firstly with the bat, making 268 Runs @ 22.33, playing a number of roles from an opening batsman down to finishing the innings off at number 7. Tane also became an important contributor with the ball taking 4 wickets with his leg spin, with his best figures coming in the Barclay Shield Grand Final, taking 2/28 from his 8 overs.

Congratulations to Luke Jurkovic who won the award for the most improved senior player. Luke had a fantastic year with the ball, pushing himself up into the 4th XI and finishing the season with 25 wickets @ 11.20. Including a career best of 6/15 during the season. Luke also played an important role at times with the bat, including a memorable partnership with Nick Ellks in the Preliminary Final that included Luke hitting the winning runs to get us into the Grand Final.

Well done to the following players who won the DVCA Averages:

Well done also to Nathan Chrimes and Chris Salm who made the Barclay Shield Team of the Year, Nathan named to open the batting and Chris selected to bat at number 9.

Congratulations also to Salmy (5th 14 Votes), Chrimesy & SV (=6th 13 Votes) for their placings in the Ray Christensen Medal, a great achievement. Congratulations to Adam Tsapatsaris from North Eltham for taking out the medal.

We introduced 3 new life members  with Ritchie Mtchell, Tim Money and Kym Ellks becoming the latest inductees. Congratulations to Ritchie, Tim and Kym on their tireless efforts at Riverside over a number of years. You are all very deserving recipients of Riverside Cricket Club Life Memberships.

Congratulations to Steve Gleeson who was inducted into the Riverside Hall of Fame by Mick Newell. Steve becomes the 13th Hall of Fame member, joining esteemed company in Raymond Bowman, John Gleeson, Kevin Fitzpatrick, Philip Money, Michael Doyle, Jack Morrissey, Anthony Corcoran, Russell Grubb, Matthew Fleming, Billy Lewis, Michael Newell and Robin Hunt.
Steve played 235 A Grade games between 1990/91 and 2012/13, scoring 3,496 runs at an average of 23.50 with a highest score of 87 and making fifteen 50s with an ability to bat anywhere in the order. Steve took 384 wickets @ 17.54 with his tremendous fast-medium bowling, with best bowling of 6/14 and taking 5 wickets in an innings on 12 occasions. Steve also played in the 1992/93 A Grade Premiership, and was the apart of the match winning 10th wicket partnership of 25 runs on the final day with fellow Hall of Famer Rob Hunt, to get us over the line.
Well done Steve on your much-deserved honour

Congratulations to Chris Salm who took out the prestigious Jim Fitzpatrick Medal as A Grade Club Champion for the season. Salmy finished the season with 395 Runs @ 32.92, with a best of 58* against Lower Eltham in Round 12 and 40 Wickets @ 11.03, with a best of 6/27 against Epping in Round 8. Salmy polled in 14 of a possible 17 games, a great achievement in a grand final season. Salmy becomes the 4th player to win the Medal 3 times, joining Billy Lewis, Elliot Smale and Mick Newell, with Tony Corcoran (5) and Scott Gibbs (7) the other major winners.